Posted by escarabajo escriba at 6:33:00 PM No comments:

It is that time of the day when you sit on your porch and the world seems to turn the page. Under flickering street and city lights the world looks different…it shadows the garishly brightness of the day.

The day’s lights are dimmed just enough that you still notice the outlines of the world that surrounds you, yet slightly obscured by flimsy sheets of darkness that sensuously drape over everything.

You adjust your sight, as well as your other senses, slowly to this new reality, and start noticing all that was shut out by the brightness of the day…the sounds and smells of your surroundings start to take place upon the sooty fabric of the night, and your senses tune in better to the overall ubiquity of your muffled surroundings.

Gently a faint twinge of warmth creeps over your skin as it bids its farewell for the day. An imperceptible aroma of warm copper wafts in the cool night air. The soft crackle of a home fire or two interrupts the white noise produced by the soft hum of electric lines that covers the immediate world. The rustling sounds of slumbering creatures stirring fill the void.

In the periphery of one’s senses lurid shadows flitter shying away nervously under the flickering instances of street lights. Swarms of warm microscopic beasts, sleepy creatures freshly awakened by the fall of the sun, flittingly rise from cooling open fields to the faint promise of the electric hum of the porch lights like phantoms of yesteryear swirling gracefully in the waning dusk.

It is then, under the silent hum of the porch lights, that you start to wonder and to imagine…to softly re-create your surroundings with the wonders of your inner senses…to slowly flesh out a world that has divested itself of its slighted imposture to reveal before you its hidden side…

In the mottled twilight of day’s end soft wisps of “maybes” and “could bes” rise as muted dreams of possibilities swirl playfully in the minds of lonely beings that silently witness the vanishing light of day.

Slowly words fall into place. Images begin to coalesce around a sound, around an idea. Senseless stains on virgin canvas take meaning as lines and curves converge upon open fields of white to give form and substance to a dream.

Muted forms linger softly upon the shadows of the norm. They walk carefully through the recently abandoned precincts of the brave, of sullen entities that disparage their presence with their brevity in being, in caring, in defining their fellow beings as others.

In the darkness, muted forms display their wares upon the inky cool blankets of the night; beings of shifted forms inhabit unrecognizable parapets and venues to delight in the precarious traverse of shiftless forms through tenuous fissures of dark and light.

It is all a dream. A well-meant offering from yesteryear. A once upon a time innocently wrought from afar to sway away your fears and despairs.

The softness of the night soothes these fears with its enveloping mists of hope and calm…the darkness offers a reprise from the harsh reality of the light, from the harsh sentences of prying eyes hidden behind the tinted warmth of the flickering porch lights.

It is all a wish upon that one star that mockingly lingers above all of creation daring you to dream, to believe that you are the one among many others who equally believe to be the one and only one. To wish upon it to be someone in a world of many who seemingly mimic your dreams, your aspirations to be. So wish upon your star…before in its indistinct insolence it decides to fall away…

Posted by escarabajo escriba at 1:33:00 PM No comments:


I am stilled…yet I move silently through space and time dipping my self into the rippling oscillations that define my surroundings, amorphous circles that silently vanish as they spread out from my being

Invariably, I ride the waves, momentarily, until they disperse into the nothing, the space that is not space, and into time that is stilled at birth. I ride the waves of reality, a being that become in the latent memories of its being, of a remembrance of that which was once and will be before being again.  I ride the waves of reality bound to the ambivalent wills that sensuously course through the membranes of being…becoming one and other, once and always in the temperament wake of the waves crests breaking upon the reefs of an occasion brought to life…a singular moment lifted out of the breaking white waters of locality to once again be thrust into the calm waters of space-time to await the surge of the next wave, the next moment of becoming being.

And there, between the sultry sprays of mist that arise from the break of the waves upon the reefs of an occasion: there in the shadows of savory mists that wash the memory off a trembling body thrust into the open space of time, there I see you…or, rather, I see the wisps that were you before the moment: I see the curvature of being enveloped by the mantles of space-time. I see the flickering reflections of a memory to be, a scintillating calm saunter its way riding its own wave through the vast emptiness of space…

Like many, once and again, come you; you become…once and always: never having been…never to be again. A moment in space-time…being…becoming…not-being what was but will be.

Was I real? Were you real? What is real?

You see: whether you know it or not, I am a part of your being, of your life, of your passage through space-time…for as long or as short as it may be, my presence being only temporary, no more than a moment in a series of moments…forever a forgotten memory foolishly imprinted on the chance of a moments gleam. You were there…maybe. But in the act of being you did not see me there…waiting. For I was not there. Not when you looked. And so I moved, as you moved…and we moved away knowing neither to what, nor from where. Be it a wonderful moment…or an empty shell of delusions…that is not for us to know, but to be lived in the memory of what has been, of what never was…

It doesn’t matter…in the end it never does…one is a moment in everyone’s being, a forgettable one at that…memorable in its forgetting. I was one in yours, as I have been in many others. I have moved on; as I never was there to begin with…I always moved on to seek a new port to light its way…stilled in the presence of a being, forever moving, forever riding the wake of the moment, a moment that never was…a moment that has always been…

Posted by escarabajo escriba at 7:11:00 PM No comments:

Posted by escarabajo escriba at 1:42:00 PM No comments: 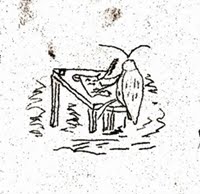